The Cathedral of the Marshes 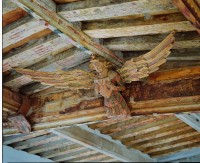 Blythburgh has had a long history of Christianity dating back to pre-Conquest times. Indeed the Saxon period may have been the greatest time for Blythburgh, and we believe there has been a church on this very site since 630. In the 'Domesday' survey of 1087, Blythburgh is listed as a royal burgh with one of the richest churches in Suffolk, perhaps a minster with missionary duties. Canons from Essex founded Blythburgh Priory in 1130, and it was to their prior in 1412 that Henry IV granted the right to build this church.

There was a great surge in churchbuilding in Suffolk in the fifteenth century, reflecting a substantial increase in prosperity during this period. Blythburgh benefited from the commercial activity of the time - from the cloth trade of West Suffolk, from its position on the great medieval road linking London with the east-coast ports and the continent of Europe and from the coastal and fishing trades. Indeed, Blythburgh was so important that it rated two annual Charter Fairs. However, ironically, Blythburgh itself was already probably past its most prosperous days when the church was begun, as a result of plague, the wars abroad and the rise of other trading centres on the East Suffolk coast.

There was local rivalry in churchbuilding, and Blythburgh is one of a group of churches near the sea competing in beauty and wealth. It should be compared with Southwold, Covehithe and its own daughter church at Walberswick.

Why Such a Large Church?

The shape and form of fifteenth-century churches was determined less by the size of the population than by the religious practices and doctrines of the day. Housing the congregation was in many ways a secondary aim; the building was raised, after all, to the glory of God.

The nave roof needed to be high to allow space and light through the clerestory windows to highlight the crucifixion figures standing on the rood screen. Aisles had to allow space for additional altars and processions. And the great men who had given generously to the building had to be accommodated by the founding of chantry chapels where masses could be said every day for their souls and the souls of their families. In Blythburgh, it was the Hoptons of Westwood Lodge who had reason to thank God for their worldly success.

The church began its long period of decline quite early in its history. Its problems began in 1538 when the nearby priory was closed by Thomas Cromwell during the Great Dissolution, leaving the parish church to face alone the forces of reform, reaction and secularisation.

Then, in a great storm in August 1577, the church was struck by the hand of God (or was it the devil?). During the morning service, lightning 'cleft the door, and returning to the steeple, rent the timber, brake the chimes, and fled towards Bongay, six miles off,' leaving on the Great North Door, clearly to be seen today, the fingerprints of the Devil in scorch marks. A man of forty and a boy of fifteen were found 'starke dead'.

The mid seventeenth century was a time of sad destruction for many glorious East Anglian churches: Parliament demanded they be rid of superstitious ornaments, and a local Puritan, William Dowsing, was commissioned to do this. On 8 April 1644, he came to Blythburgh and ordered the removal of '20 superstitious pictures, one on the outside of the Church; 2 crosses, one on the Porch and another on the steeple; and 20 cherubim to be taken down in the Church and Chancel ... and gave order to take down above 200 more pictures, within 8 days'. How different this church would be today if it still had these treasures ' particularly the pictures in the stained glass windows.

There are dramatic versions of the Puritan attack on the church, including bullets fired into the roof and horses tethered to the pillars of the nave. The holes in the faces of the angels, the rings set in the north pillars and the trampled brickwork of the floor, all make us want to believe these stories.

Problems continued through the days of the Commonwealth and Restoration: a note in the Parochial Visitation Book in 1663 says 'here at Bliburgh hath been no communion for these 12 years past'.

In fact, the church suffered less from the zeal of the Puritans than from the neglect of later centuries. By 1819 the church presented a sorry sight: '. . . tracery removed, windows patched up with bricks and mortar, shields and angels' wings falling disregarded from the roof.' What brought about this neglect? Grinding rural poverty, competition for religious allegiance and the absence of a rich resident patron all contributed to the dereliction of the church. In 1847 the church was described as 'mouldering into ruin', and thirty years later a newspaper reported the congregation sheltering under umbrellas from the rain pouring through holes in the roof. A year later again, the church was closed as unsafe.

Possibly one of the most remarkable parts of Blythburgh's history is that a ruin of such sentiment and romance escaped the attentions of Victorian enthusiasts for restoration and so survives today unspoilt, though a plain and whitened version of its former colourful self. Major works of restoration were put in hand, and the church was re-opened in 1884. For the next 100 years much work was done: windows unbricked, reglazed and releaded, worm-eaten wooden pews replaced by oak from the old mill post of Westleton Mill, the Priest's Room over the porch rebuilt and opened as a place of prayer and meditation, and the great roof over the nave and chancel practically rebuilt and raised over 20 cm. Work of this kind goes on for ever, and two major programmes in the last twenty years have seen treatment for death-watch beetle and, more recently, repair work to the clerestory windows, the roof and the inner fabric, culminating in a lime-washing of the whole interior to put the finishing touches to a century of restoration.